Fortunately, by the time you found out that the world was in desperate need of a laser playing Still Alive while etching the Aperture Science logo into a stainless steel plate, such a thing already existed.

John R. MacArthur is publisher of Harper’s Magazine and a monthly contributor to The Providence Journal, among other publications. This essay is one of this year’s Delacorte Lectures at the Columbia University Graduate School of Journalism. The Delacorte Lectures, presented each week in the spring semester, examine aspects of magazine journalism by a leader in the field of magazine publishing.

Long before I took myself off Facebook, I doubted the so-called revolutionary potential of the Internet. In part my viewpoint was formed early on by the annoying smugness of the pre-crash dot.com “entrepreneurs,” who always seemed to be murmuring initial public offering nonsense at a table next to mine in tony restaurants.

I recall one such occasion in the year 2000 when Lewis Lapham, then editor of Harper’s Magazine, and I were dining in indirectly lit luxury, somewhere near San Francisco on our promotion tour to celebrate the magazine’s 150th anniversary.

Lewis was born skeptical, but when he heard the three men at the next table discussing in hushed tones what sounded like easy money, he couldn’t help himself and he inquired about how we could get in on the ground floor. “It depends,” said one of them smoothly, “on what kind of platform you want to establish, how you want to present your content.” I said that I wanted to publish a magazine filled with sentences, not build a tree house, and the conversation came to an abrupt halt.

Click through for the whole thing. It is … fascinating, at least. And will make you look around to see whose lawn you should be getting off of.

As much as I enjoyed Johnny Depp’s performance in the remake, there is no question in my mind that Gene Wilder is the One True Wonka, and this remix makes him even more awesome.

Everybody should be listening to this guy. All the time.

This is awesome. Not entirely beyond believability, too – after all, Disney’s all about “family movies” in which the families are torn apart.

And here’s a Disney bonus, just because.

It’s been a month or more, but welcome to another edition of Daddy Music. Mom’s out of town, Sister is at a Girl Scouts event, so The Boy and I decided to do another installment. Today’s selection (randomized) is from Loney Dear, an artist I’ve heard of but not really listened to.

Dad: So what did you think of this song?

Boy: I really liked it, but I don’t really see why it was called “Summers.”

D: The lyrics were a little hard to make out. I did hear him say “summers” at one point.

B: I like the music, how it sounded. Was it only one instrument? Because I only saw him playing guitar.

D: Well, there are keyboards too.

B: He plays guitar and keyboards?

D: Songs like this are usually recorded on multiple tracks, so he might have played guitar on a track, then played keyboards, then sang, and all of those tracks would have been mixed together. He may have had a drummer, too.

So what was it about the music that you liked? How did it make you feel?

B: I like that it was harmonic. It was exciting yet soothing. Like a celebration after a long day.

D: I see what you mean. I like the way it sounds like a lot of different layers of sounds. (That’s from the multiple tracks mixed together.) There are a lot of sounds harmonizing together.

What about his voice?

B: He sounds young. I like his voice. He mostly sings high. I wonder how low he can go.

D: He has a kind of breathy, folk singer sound – I could imagine a guy sitting in a coffee house strumming a guitar. But with a full band behind him.

D: It’s possible he has backup vocals, but that background droning could just be keyboards and the orchestration. Do you have any other thoughts about the song.

B: It seems longer than some of the others.

D: You’re bouncing in your seat. Do you like the rhythm?

D: Anything else to say about this song?

B: I would like to know how long it took him to make it. Because it could have taken him a lot less time to write the song than it took to process it.

D: That’s probably true, because he would have had to record the different tracks and then put them together and edit. Anything else, or are you tapped out?

B: Tapped out. But now I have to say my special goodbye. I know what I’ll do – I’ll do a bunch of different languages saying “goodbye.” Adios. Shalom. What’s French?

B: Oh yeah, now I remember! I guess I’ll save the others for another time.

I am surprised by how much I liked this song. Loney Dear is not necessarily an artist I would have considered – I think he may have been at one of the Pitchfork festivals I was at, but I don’t really recall him – and this style, with its soft, thick blankets of layered sounds, and soulful, melancholy vocals, is not my usual first choice. Still, every once in a while, a song like this comes along that just catches under my skin. (The last one I can think of was “Heydays” by Great Lakes Myth Society, which is on my 5-star rotation.) This one is good enough that I will now look into other Loney Dear tunes. 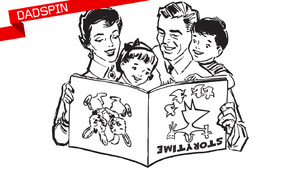 Click through for “If You Give A Mouse A Cookie, You’re Fucked: 10 Tips For Avoiding Terrible Children’s Books.” Sage advice. Take it to heart. (Been there, done that.)