I recently read Ancillary Justice, by Ann Leckie, and enjoyed it quite a bit. 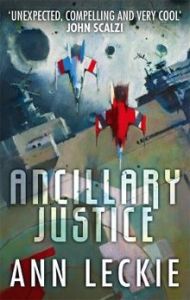 The story takes place in a universe dominated by a religious empire (the Radch) that has expanded aggressively, using (among other things) sentient starships which interact with their human commanders through human bodies called ancillaries. The narrator, Breq, is a former ancillary from a particular echelon of ancillaries of the warship Justice of Toren, platoon of its ancillaries, but is now a single individual. Breq’s sole goal now is to exact revenge against the person who effectively destroyed her as a ship and left only the one ancillary.

The story itself is a little slow to get rolling, but ultimately becomes a compelling space opera, weaving together Breq’s current journey with the slow reveal of what happened to the Justice of Toren. What I (and many reviewers) find so fascinating about the book, though, is that the Radch empire uses a language (which presumably reflects a culture) that does not mark gender. Breq and the other Radchaai characters refer to everybody using feminine pronouns–“she,” “her”–even while describing or otherwise indicating that particular individuals are male. Thus, on a planet outside the empire, whose native language does recognize gender differences, Breq will listen for cues from natives as to whether a particular person is male or female, while Breq’s internal narration consistently uses only feminine pronouns.

At first, this was a little odd. In the beginning, the use of “her” and “she” in conjunction with a description of a character as “probably male” (Breq’s not very certain all the time) jars one out of the story a bit. About 50 pages in, though, it struck me that gender didn’t matter. Whether a given character had male or female genitalia, or whether they identified as one gender or another, was entirely irrelevant to the story, because (a) most of the action didn’t have anything to do with sex, romance, love, or anything that might implicate gender or gender roles; and (b) even in those few instances where relationships were relevant, the gender(s) of the participants were not.

I think that when we read a book, we look for cues in the text to help us develop an internal image of the characters, and that’s why the use of non-gender in this book was a bit jarring. But when it finally clicked for me, I realized that my internal visual image of the characters was irrelevant to the story and to my enjoyment thereof. The use of feminine pronouns dispelled the “default” maleness for characters whose sex is not specified (because–again–it doesn’t matter).

I am sure there are people who think the genderless approach is a gimmick, or who will bristle at not knowing exactly which equipment a particular character is sporting between their legs (or who will be offended at the idea that a male-sexed character–whose maleness might be cued in the text–would be referred to as “she”). Some might think it distracts and detracts from the storytelling. In a lesser story, maybe any of that distraction would have been a negative; but for me at least, the transition from catching myself constantly wondering and adjusting my internal image of the characters to realizing that I knew exactly what was going on and it didn’t matter whether a particular character was a man or a woman or something else added a cool dimension to the whole experience. I’m looking forward to reading the next two books. (Because isn’t everything at least a trilogy these days? Ancillary Sword is already out, and Ancillary Mercy is coming this year.)

One thought on “MorF? ForM? Who Cares?”